Agra, popularly known as The City Of Taj Mahal or The Majesty Of Taj, is situated in the north Indian state of Uttar Pradesh, some 200 km of distance from Delhi. The city has three UNESCO World Heritage sites, the Taj Mahal, the Agra Fort, and the Fatehpur Sikri which is almost 40 km away. There are also many buildings and tombs built which marks the Agra as a beautiful city from its glorious days, as a capital of Mughal Empire. The history of Agra is aplenty evident from its numerous historical monuments in as well as around the city. Though the history of Agra city is linked with the Mughal dynasty, numerous other rulers also contributed to the rich history of the city. Agra was founded by the Sikandar Lodhi in the 16th century. Babur also stayed for sometime in Agra and during his stay he introduced the concept of square Persian-styled gardens. Emperor Akbar built the Agra fort and beautified it with palaces and gardens. The post-Mughal era’s history of Agra includes the rule of the Jats, Marathas and finally the British taking over the city.

Not only Agra, but India is synonymous with the Taj. Besides being the pride of India, Taj Mahal is the epitome of love, poem in white marble, and one of the seven wonders of the world.

The Taj Mahal being the monumental of love, is located on the right bank of the Yamuna River in a vast Mughal garden which encompasses nearly 17 hectares, in the city of Agra. It was built by Mughal Emperor Shah Jahan in memory of his wife Mumtaz Mahal, being construction started from 1632 AD and completed in 1653 AD. The monument is considered to be the greatest architectural achievement in the whole range of Indo-Islamic architecture. Its recognized architectectural beauty has a rhythmic combination of solids and voids, concave and convex and light shadow;  increasing and beautifying the aesthetic aspect. The color combination show cases the monument in ever changing tints and moods. 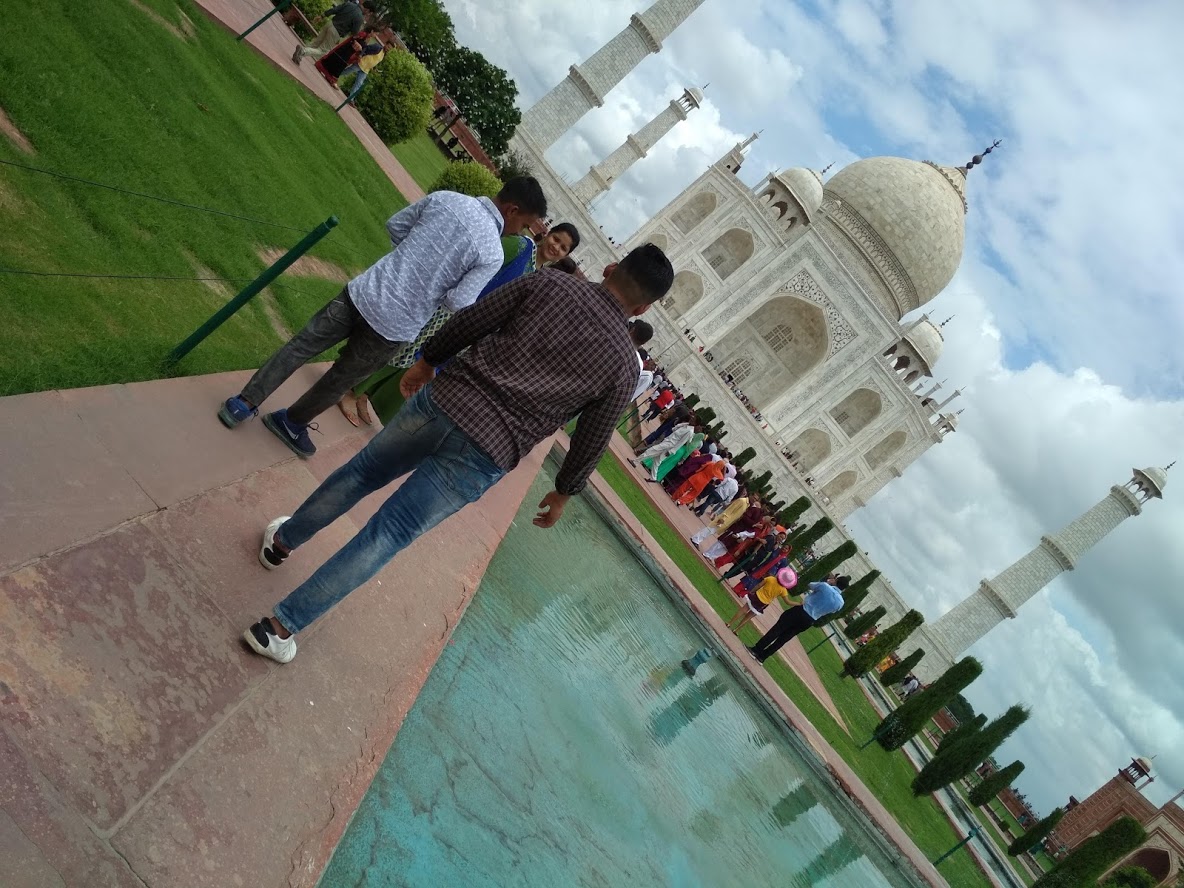 The uniqueness of Taj Mahal lies in the innovations carried out by the architects of  Shah Jahan.

The Taj Mahal is synonymous to love and romance as the name “Taj Mahal” was derived from the name of Shah Jahan’s wife, Mumtaz Mahal, which means “Crown Palace”.

Ironically, the very first sight of the Taj Mahal, leaves the visitors mesmerized, sparkled as well as perpetually enthralled. The beauteousness of this magnificent monument is such that it is beyond the scope of words. The thoughts that first strikes your mind while watching the incredible monument, Taj Mahal is not just its phenomenal beauty, but the immense love which is the reason behind its construction.

NEARBY PLACES TO VISIT IN AGRA

Agra Fort was built in the year 1573 under the rule of Akbar – one of the greatest Mughal Emperors. It took almost 4000 workers and about eight years of hardship to complete the fort. Knowing the importance of its location, Akbar built the fort to make it as the main residence for the Mughals. The fort consist of various palaces and halls, among the palaces, the prominent ones are Macchi Bhavan, Khas Mahal and Shah Jahani Mahal.  Other attractions of the fort includes; a grape garden, a jasmine tower, a mirror palace or Shish Mahal, courtrooms and the ruins of Akbar’s magnificent palace. Unfortunately, many of these buildings were destroyed at different time periods for various reasons. Often recognized as the walled city, Agra Fort is a UNESCO’s World Heritage site. Today, this fort is the major tourist spot and attracts many tourists from all round the world.

The tomb of Itmad-ud-Daulah being called as the ‘Baby Taj’, is considered as the inspiration for the world wonder, Taj Mahal. However, the tomb of Itimad-Ud-Daulah is a more delicate artwork than Taj Mahal, engraving marble lattice screens and fine carvings. This is the first Mughal structure made with marbles by the mother of Shah Jahan, Nur Jahan.

The main element of Itimad-Ud-Daulah tomb structure is the dome, which is similar to that of  Persian architecture. This tomb was the first one to use pietra dura style decoration accruing with semi-precious stones. Every surface of the structure is well decorated with motifs of flora, geometric structure, trees and others. Inlaid stone works are being used to enhance the beauty of the interior part of the structure. Hence, the beauty of the tomb cannot be compared with any of the other monument.

The Jama Mosque is located near the ironic Agra Fort and popularly known by the other name ‘Fiday Mosque’. It one of the largest mosques built by Mughal in India. This was dedicated to the daughter of Shah Jahan, Jahanara Begum. The construction was undergone by 5000 workers and it took almost six years to complete the construction. The architecture is mind-blowing and the lotus and kalash finials are formed on the bulbous stones. There are lot of things that out case the talent of that period. The design of Jama Masjid is very unique and found rarely in the world. The use of black marble can also be seen in its architecture. Jama Masjid is open for all the tourists and people can pray here at any time they visit. It is a must visit place in Agra. 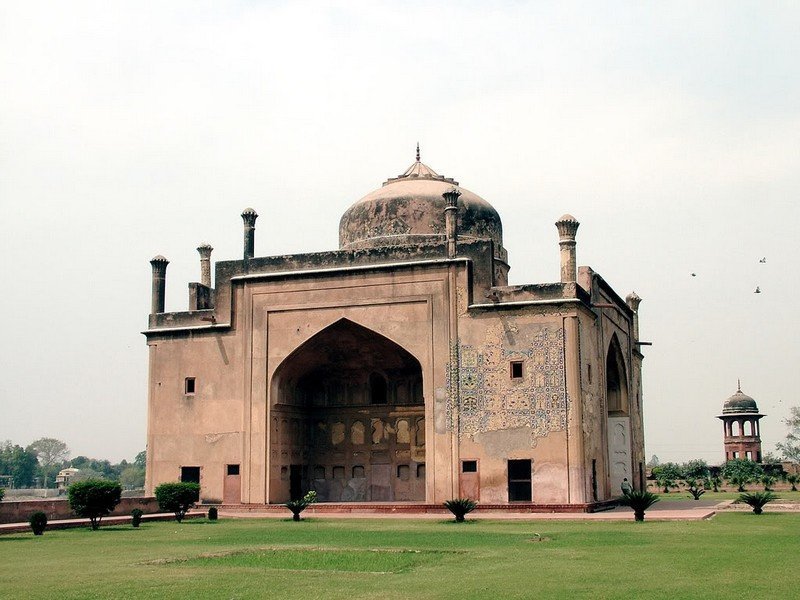 Chini ka Rauza is a funerary monument situated on the eastern bank of the Yamuna river in Agra, which is dedicated to the memory of Prime Minister of the court Allama Afzal Khan Mullah, during the rule of the Mughal Emperor Shah Jahan. Built between 1628 and 1639, the architecture of the monument is a marvelous fusion of the Indo-Persian style.

The monument is supposedly decorated by glazed tile work. The tiles are known to have been imported from the China which makes the monument more striking with their color embellishments and artwork. Hence, the Chini ka Rauza is a one of the fantastic examples of long-gone style and a marvelous architecture. 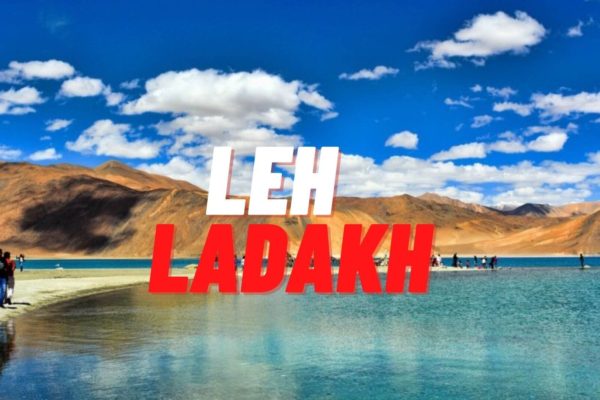